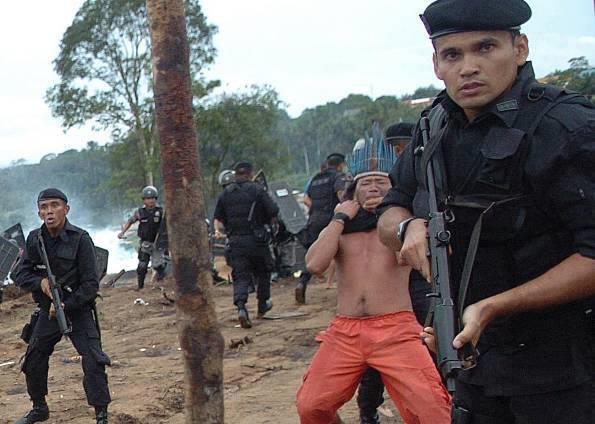 From Where Do Our Rights Originate?

Are they an inherent, inseparable gift from God and/or nature, or are they derived from one's government?

The tragedy of what happened to the Kayapó tribe in 2012, and to the indigenous life unique to the 400,000 hectares surrounding them, as a result of the Brazilian government's authorization for the construction of the Belo Monte hydro-electric dam, is not merely limited to the geographical area in question. This tragedy will only continue to repeat itself, further upstream, so long as the government is viewed as the legitimate source of people's rights, because any government constitutionally allowed the power (presumptive or not) to bestow human rights, is a government that can, and historically always has, eventually taken them away.

Look again at the picture above. Are those armed aggressors wearing the uniform of a corporation, or of a government?

Why, then, have all the postings of that photo declared that capitalism is to blame?

A private corporation, even if it's been unlawfully (though legally - do you know the difference?) granted the rights of a person via corporate personhood (which we've always staunchly opposed), still has as much right to transgress against the property and rights of another human being as you or I (i.e. - none). Only government has such a monopoly on the use of force. The conjunction of corporate interests with government power, as defined by Mussolini himself, is called Fascism, or as he also pointed out: better to call it Corporatism, but Capitalism it is not.

All nations are Capitalist nations. "Capital" means nothing more than the accumulated wealth by which enterprise - at any level and for any means - may be pursued. To paraphrase Milton Friedman, even China is a capitalist nation. The only difference is whether a country pursues State Capitalist policies, or Free Market Capitalism instead. The choice, as epitomized by that nation's people and/or their rulers, is ultimately a moral one, regardless of education, though that is certainly the principle contributing factor.

When (free market) Capitalism is blamed for something the State is responsible for, who benefits from the deflection of the truth, and who suffers more for it?

You and I are this free market that is being blamed. Free market capitalism represents our ability to start a new business and fashion a livelihood for ourselves without hindrance from the government, so long as nobody's rights are being violated. It does not represent our ability to freely trespass upon the property or rights of anyone else. No private entity can commit such a crime, because that is the definition of a crime.

When the blood diamond trade finally came to an end in Africa, it was not due to the government, who facilitated, turned a blind eye towards, and even took money from its perpetrators in order to accommodate those transgressions. It came to an end because of the marketplace. You are the free market, and you are the ones who treated the facts responsibly and with respect for the lives afflicted; lives that would never have been compromised without license from the government to begin with. Would you buy a diamond if you knew what blood was spilled for it?

"All objections against free markets result from a misunderstanding of what a free market is. A free market is one in which no one's rights are violated, resulting in all transactions occurring by mutual, voluntary consent. Participants in a free market practice the non-aggression principle. This does not require unrealistic virtue from market participants, because it is government's duty to enforce the non-aggression principle. Every economic problem plaguing American society today stems from some departure from the free market, which is some violation of the rights of market participants. Justice is the protection of those rights. Social justice can only be achieved when absolutely free markets exist. Properly understood, freedom and free markets are one and the same." ~ Tom Mullen

Given that the consortium behind the Belo Monte dam construction project (Norte Energia), is controlled by the state-owned power company Eletrobras (65% owned by the Brazilian government at the time, and primarily funded by Brazilian taxpayers through the BNDES, Brazil’s giant development bank), the notion that (free market) capitalism is even remotely responsible for the crimes that were committed against the Kayapó tribe, and mother nature, there in the amazon, only works to strengthen the purposeful misunderstanding regarding capitalism being spread via the media.

Just as a relatively free and uncontrolled press and news media industry, back in the ‘70’s, allowed for (and was essential towards) the truth of the blood diamond trade becoming widely known and consequently eliminated via the market, today’s press and news media, by contrast, is now nearly totally consolidated (i.e., - monopolized). When an industry has the market cornered, as the energy industry most certainly does, it behooves them – for their own sake – to eliminate the competition. Government force, combined with corporate interests, is how they’ve been doing that, with support from the now captured news media industry – to prohibit sane and correct market reactions – and this is what is called Corporatism.

It’s essential to carry the correct definition of words, otherwise confusion is spread and there’s a reason certain ruling classes benefit from that just the same. A free market utterly depends on a free and unbiased press. As John F. Kennedy himself observed, in a speech on secret societies he delivered not long before his assassination, the news industry – the press – is the only business mentioned by name in the First Amendment to the Constitution. If you’ve never heard that five minute speech before, please listen to it and then you tell me, what do you suppose he was trying to tell us?